As a parent the journey of life involves your children. My Husband Will and I are no different. Each of our children has come with unique situations and we’ve learned from them all. It’s no secret, when you become a parent, God gives you an extra set of eyes and ears to see and hear the things that go on daily in the household. There’s something incredible about a mother’s intuition that I can’t explain. With that being said, my gut instinct has never let me down when it comes to my children! This particular story involves my daughter Jaimee and her struggle with cancer.

Growing up our daughter Jaimee had always had headaches and a bit of a lazy eye. We had taken her to the pediatrician several different times where she was misdiagnosed more than once. As recent as about nine months ago, things started to change. Jaimee was getting nauseous and throwing up almost every morning in addition to her other symptoms. At one point, it got so bad that she could barely move. She was so weak from being sick, that she wasn’t able to walk to the bathroom on her own. Due to her symptoms she became dehydrated and also suffered with a bad sinus infection and UTI. She was prescribed antibiotics and while taking this treatment, Jaimee was still showing signs of nausea and fatigue. It was clear she was not getting better and I was getting worried and concerned. After dealing with misdiagnoses and failed attempts with medicine, I opted to get Jaimee an eye exam. In hopes that there would be nothing found and I could get peace of mind, but for some reason my gut was telling me something different.

After several tests and an appointment with the Optometrist, my worst fears were confirmed. Jaimee had a rare eye disease called Nystagmus. In addition to hearing that news it was also mentioned, several times in that short appointment, that he was afraid that Jaimee had lesions on the brain. Talk about knocking the air out of your lungs and making your knees buckle!

I felt sick and terrified! I had so many questions and not enough answers! That is when we decided we needed to go see an Ophthalmologist instead of an Optometrist. We made an appointment to go see a specialist at Marietta eye clinic the very next day. Again, she was diagnosed with nystagmus. Nystagmus is a condition where the eye moves back-and-forth at a pretty fast pace. There are multiple kinds and Jaimee had acquired the Nystagmus which is usually caused by trauma to the eye. After we met with the Ophthalmologist and confirmed the diagnosis, she referred Jaimee to see a specialist, Dr. Weiner the Nero Ophthalmologist.

So the Monday after Easter we came to meet with Dr. Weiner for some more testing and during that testing it was suggested to get a MRI done. I had so many mixed emotions! I knew that there was a pretty good chance that life was about to change drastically. The life we knew before was never going to be the same. The results of the MRI came in, and once again, my gut was right, it confirmed that Jaimee had a brain tumor. Not only was it a brain tumor but there was a cyst attached to it as well.

The cyst turned out to be a blessing in disguise because the cyst is whats causing the rapid decline in her health. Had it not been for the cyst we might have found out about the brain tumor too late. The last couple weeks before surgery Jaimee started losing her balance and it was clear her ability to walk was being effected. Her speech also started to change. She also experienced dizziness. As a matter of fact, the day before the scan she got so dizzy at school that she blacked out and said she couldn’t see. Thank goodness the scan was the next day because we couldn’t have waited another second! As you can imagine having to wait two months to get this scan was extremely torturous! This was extremely stressful on the entire family financially, physically and mentally.

After the scan, Dr. Weiner took my husband Will, Jaimee, and I into her office and showed us the pictures from the MRI. The tumor was so big, I could clearly see it as soon as she put up the picture. With Jaimee standing right there between Will and I, Dr.Weiner told us that the tumor did not belong and needed to be removed as soon as possible.

Immediately that same day, she sent us to Scottish Rite to meet with the neurosurgeon Dr. Boydston. After viewing the scans and Jaimees condition, he scheduled another MRI to prepare for surgery with more contrast and more detail, so that he knew exactly was entailed. We met with Dr. Boydston that afternoon to read the results. He told us to go home and gather our things and to be prepared to be living at the hospital for a lengthy period of time because Jaimee was going to require surgery and therapy. My heart dropped into my stomach, this was only the beginning and Jaimee had already been through so much. We went home that weekend and made lots of memories, we had a great time with friends and family! Everything happened so fast, that when I look back now, all I can say is WOW! We are so blessed to have so many loving and caring people around us, to help make this a special time.

After spending time with loved ones, we started getting ready for our temporary move to the hospital. That’s when it all hit me, there are some children that have had this surgery and end up in an induced coma. Some have tubes put in place to drain fluid from the brain, pick lines for nutrition, zero speech and chances of never walking again. And not to mention the pain that most children feel after the surgery! It was almost too much to bare, but the support from my family is what held us all together and kept us thinking positive.

We spent the first few days after surgery in ICU. I remember while waiting for her recovery feeling so anxious, I just wanted to see open those beautiful brown and hear her sweet voice again. I remember being so relieved to see her waking up and hearing her call me “my momma”. However we quickly realized that something wasn’t right with her speech or the left side of her body. She had suffered some pretty big setbacks after surgery and was left with paralysis on her left side and her speech was impaired.

Our Jaimee is a tough girl and even through all the tests, scans and surgeries I had yet to see her cry. She stayed strong through the entire process. Then therapy started and that’s where the real struggle began. The nurses and the therapist started coming in and it was time to make Jaimee stand up on her own 2 feet. Then the tears suddenly began to fall. For the first time ever I saw fear in her eyes. As a mother, it was killing me inside to see my daughter go through this. I wanted to attack the therapists and tell them to leave the room, but deep down I knew this had to be done. I had to keep reminding myself they were only trying to help Jaimee. In addition to the physical therapy, Jaimee took speech and occupational therapy.

After only 7 days we were moved to the rehabilitation floor and the all-day therapy kicked into overdrive but with each therapy session we saw our Jaimee getting stronger and stronger. We are so grateful to all the therapists at Children’s Health Care of Atlanta! After 21 days in the transitional living unit, we heard the news we have been longing for. We were finally going home! Even though we were getting to go home, we had to agree to take Jaimee to day rehabilitation five days a week across from the hospital.

After 8 weeks, she graduated rehab and she then started robotics therapy and continues to do so. Over the last few months we’ve watched Jaimee go from a sick and weak little girl, to a strong and courageous young lady. Every three months we have to have MRIs to make sure the tumor is not growing in and the cyst is not filling.

She just had her first MRI post-surgery and praise the Lord the tumor has not grown nor has the cyst filled! We are so relieved! Our little family has been through a lot of storms in our years however we have always come out stronger and more courageous after each storm. You can’t have a rainbow without a little rain.

We are happy to introduce Jamiee Romines as our 2017 Nancy Falco Fund Recipient! Come join us September 30th 2017 at Blue Mark Studios to help celebrate this wonderful young woman and raise as much money as possible to help her and her family get through this tough time. Every penny counts, so even if you can’t make it to The Dance you can donate on our website, we look forward to seeing you all there, let’s make this the party of the year! 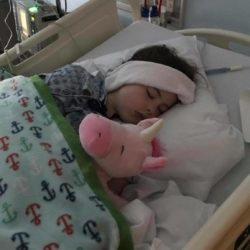 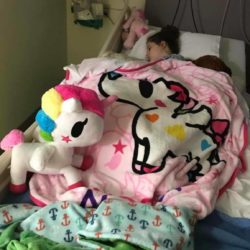 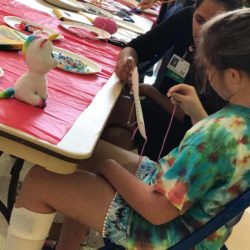 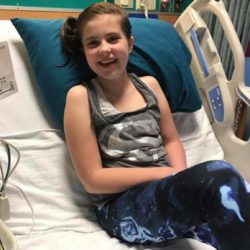 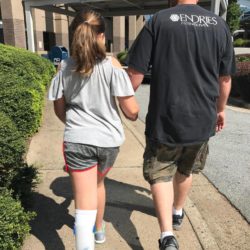 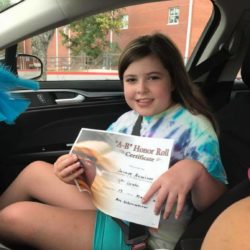 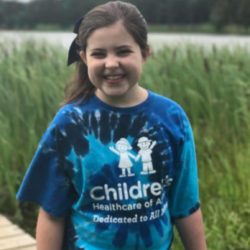 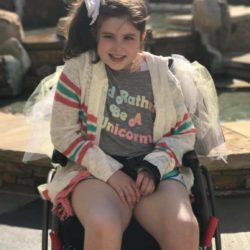 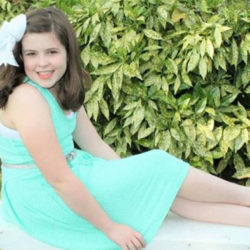 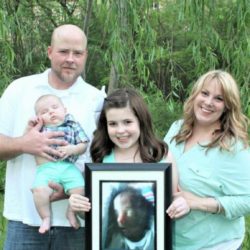 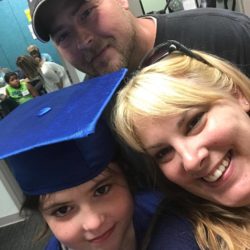 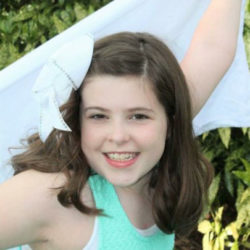 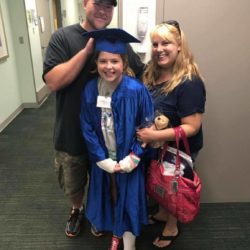 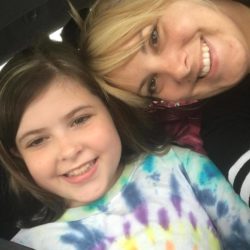